Masked premieres in less than two weeks.  Which is why I've been so scarce around here of late. (Well, that and a few other things. More on that later.)

(If you haven't heard about Masked before this, it's a new literary web series based on The Scarlet Pimpernel by Baroness Orczy.  You can check out our website here, visit our IMDb page here, follow us on Twitter and Tumblr, or like our Facebook page.  Oh, and we're also on Pinterest.  Was that a sufficient social media dump? :P)

In light of this exciting news (I feel like I should have inserted a few more exclamation points in that opening sentence....), I thought it might be fun to have a Scarlet Pimpernel themed blog party in preparation for the premiere.  The pilot episode of Masked will air on YouTube on September 8th, and beginning September 1st, I'll be hosting a myriad of fun stuff here on this blog!  Watch out for trivia quizzes, movie reviews, production stills from the upcoming modern-day adaptation of The Scarlet Pimpernel (cough cough... this is all about shameless product placement) and even some interviews with the cast of said modern adaptation!  And possibly a giveaway... one never knows...

If you're interested in participating, please grab the HTML code for the button below in the handy little box that's below THAT.  Paste it on your blog in a post or on the sidebar to spread the word, and then check back here on September 1st for the party launch! See you then! 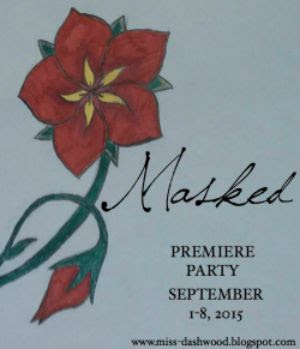