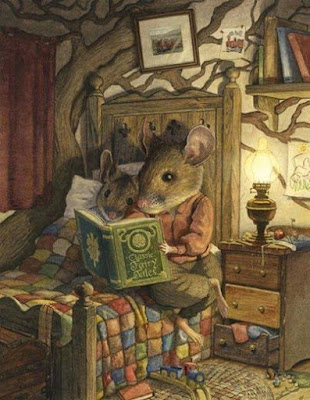 I realize that saying I'm going to make this a monthly institution is like saying that I'm going to get up at 5 AM every day-- in other words, a million little pieces of the universe will conspire against me to make sure it doesn't actually happen.  But for January at least, I'm going to try and recap what I read this month, what I'm still reading, and what I think of what I've read.  Have I said "read" enough now?  Yes? Good. 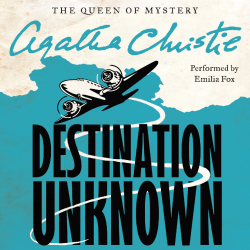 Destination Unknown wasn't quite my least favorite Agatha Christie mystery-- that distinction would have to go to Postern of Fate, which was doubly disappointing because the plot was lackluster AND because it was about my two favorites of her characters, Tommy and Tuppence Beresford.  I expected better for T&T.  Destination Unknown is a standalone novel, and the detective (something Jessup) is forgettable at best, but the main character, Hilary, was actually quite likable.  (I should clarify that I listened to this as an audiobook on my way to and from work, and didn't actually read the printed text, so if I spell the names wrong, it's because I didn't bother to look them up.)  There wasn't actually a whole lot of mystery mystery though (i.e. no one was doing much detective work... just sort of following enigmatic people around and being taken to remote scary institutions and pretending to be other people's dead wives) and I like mysteries to challenge my little gray cells.  I definitely enjoyed this more as an audiobook than I would have as a regular old lump of text, however, because Emilia Fox (Georgiana Darcy!) narrated it, and she's very talented and fun to listen to. 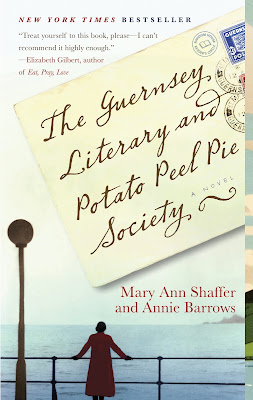 Guernsey was actually a reread-- a third-time reread, in point of fact, but I definitely enjoyed it.  I can't give it the full five stars though, because unfortunately this is one of those books that doesn't live up to the hype I've given it myself in my head.  It's such a great premise, and it's told in one of my favorite (and rarely-seen) formats-- that is, it's all in letters.  Epistolary.  It's a book for bookworms, about bookworms, and it takes place in the English aftermath of WWII, a time period you don't hear as much about in historical fiction.  It's full of fun characters and a few good quotes, yet each time I read it I come away wishing it were a little... better, for lack of a more descriptive word.  (There are, obviously, more descriptive words out there.  But I'm not in an industrious mood tonight and have not bothered to go hunting them down.)  It has so much potential, and that's where a large part of those four stars come from, but it doesn't quiiiiiite live up to the potential.  For one thing, it's not terribly gripping.  For another, it's hard to keep track of all the characters, interesting though they may be.  I think some of this may have to do with the fact that Mary Ann Shaffer was unable to finish her manuscript, and her niece Annie Barrows took over and helped her to turn it into a final draft.  Maybe more character development and a clearer narrative was in the works, but couldn't come about for one reason or another.  Regardless, this is a fun novel (despite a few themes that I'm not thrilled with-- don't recommend for younger readers) but it's not as fun as I would like it to be. 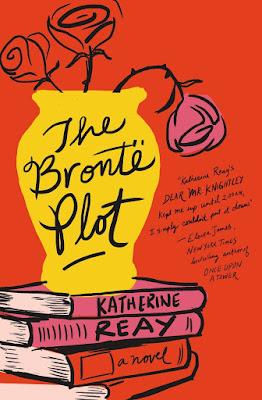 And I saved the best for last!  Katherine Reay is quickly becoming one of my favorite contemporary writers-- Dear Mr. Knightley is still the best of her books, in my personal and not-so-private opinion, but The Bronte Plot held its own.  It made me think more than her other two did (DMK and Lizzy & Jane, and yes you should read both) and messed with the lines of ethics more than either of the others, while still managing to keep the heroine, Lucy, likable and sympathetic.  (I'm still more partial to Samantha from DMK.  But that's an aside.)  Reay's previous two novels focused primarily on Jane Austen, and so I was a tad disappointed that this book revolved mainly around the Bronte sisters-- Charlotte Bronte was notoriously contemptuous of the immortal JA, and Wuthering Heights is what I consider to be one of the most time-wasting claptrap-jumbles of high school required reading.  Therefore, I went into reading this with, shall we say, a slight Bias against the authors I assumed would be forefront in the story.  I was pleasantly surprised.  The Brontes figure in the tale, yes, but as themes rather than almost-a-character as Jane Austen did in DMK and L&J.  The idea of the Bronte sisters, women with courage to endure, was a larger part of the story than their actual works, and I liked that. (I should note that Jane Eyre is one of my favorite books of all time, and I would love the opportunity to visit Haworth-- just in case you think I have some sort of personal vendetta against the Brontes. I just happen to like Jane Austen better. I'm only human.)

The male main character, though, didn't really impress me.  He wasn't unlikable-- in fact there was nothing about him that was actually off-putting, but I just didn't think much of him simply because I didn't think about him much.  I was rooting for him and Lucy to get together, but more because I wanted Lucy to be happy than because I felt they belonged together.  Sid, the middle-aged owner of the antique shop, was far more interesting than James-- even if James did like Jane Eyre.  :D

All in all, definitely a good book.  And it made me want to visit a moor in Yorkshire as soon as possible.  Dare I say that I also kinda want to read Wuthering Heights again now, if only to see if it's as awful as I remember? ;P

Some quick notes about the other books on my list-- I enjoyed what I read of Pioneer Girl so far, but since it's still a new title at my library, I had to return it after 7 days and didn't get to finish it, so hopefully in February I'll get it out again and be able to move past the interminable foreword. :P  Wives and Daughters is as enchanting as ever-- Melody and I are reading it together and thoroughly enjoying ourselves.  Beginning at Moses isn't very well-written, but it's an interesting look at Jesus' role in the Old Testament.  I'm actually quite interested in All the Light We Cannot See, but stopped it after just a chapter because that, too, was an audiobook, and the guy who was reading it was annoying me no end.  Too... many... long... pauses.... between.... each... word....  Good Night, Mr. Wodehouse, like Guernsey, had good potential as an idea but jumped around too much in the (minimal) storyline for my taste, and the lack of moral structure in an early-1900's conservative Catholic setting was eyeroll-worthy.  I don't like abandoning books, but I got so fed up with this one that I just took it back to the library.  There are other ways to spend my time. 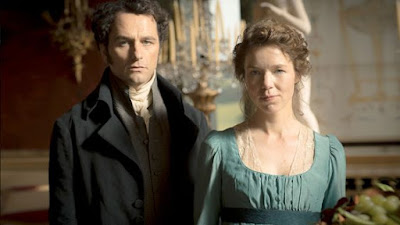 Looking forward in February to... Death Comes to Pemberley!  I actually own this, but haven't read it yet.  My sister and I just started the BBC miniseries and I'm loving it so far, so I'm anxious to read the book afterwards.  What are you reading these days?

P.S. Thank you one and all for your lovely responses to the reader survey!  I've closed the poll after receiving 52 responses (wow!) and will be compiling the results and blogging about those... soonish.

Another Really Short Post (I'm On a Roll Here) 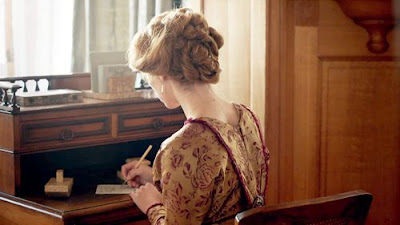 At this rate I could post, like, two or three times a week (LIKE IN THE OLD DAYS) and not even break a sweat.  Wow.  *takes notes for later*

Anyway, the sole purpose of this one is to let you know I've made a little survey to see what might interest you in the way of Future Content.  So if you don't mind filling it out, the link is here.

{{Link removed as of January 31st because the survey is now closed.}}

Thank you one and all for your kiiiiind support.

Email ThisBlogThis!Share to TwitterShare to FacebookShare to Pinterest
Labels: blogging

The sure mark of an unliterary man is that he considers "I've read it already" to be a conclusive argument against reading a work.
~C.S. Lewis, An Experiment in Criticism
﻿
Okay, NOW I've returned to haunt you.  Welcome back! The blog changes are somewhat self-explanatory, so I give you leave to poke about and see what you shall see.

Back? All right, let's continue.  Today I am going to talk about Plans for the New Year, although I don't intend this to really be a list of resolutions-- just plans for this blog in 2016.

On my to-read list for this year, in no particular order... (rereads starred)


All the Light We Cannot See
Wives and Daughters*
When Books Went to War
Rilla of Ingleside*
Gone with the Wind*
1776
The Five Red Herrings
The Wilder Life
Pioneer Girl
I Am the Messenger
Ballet Shoes*
Unbroken
All Roads Lead to Austen: A Yearlong Journey with Jane
The Great Gatsby
Jane Eyre*
Lady Susan
The Grand Sophy
Ideally I'll write/ at least a few lines of review/reaction for each of those books, but the best-laid plans of mice and men...
And on my to-watch-and-hopefully-review-on-the-blog list...
Cinderella 2015*
Copperhead
The Paradise (BBC series)
Wives and Daughters*
Lark Rise to Candleford*
Under the Greenwood Tree
I hope you've been able to keep your seat during this riveting narrative... the rest of posts for the year won't all be like this, I promise.  But it's fun to make lists in January, if for nothing else but to look back on them dismally in December and lament how little was accomplished. Heh.
What are you hoping to read and watch this year?
Penned by Miss Dashwood at 12:47 PM 18 comments: