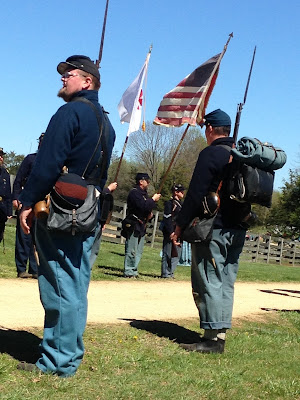 This morning, I wrote something akin to a blog post on Facebook, and after a little consideration I decided to share it here as well. Political commentary doesn't generally fit in too well with the standard bill of fare on YAPDB, (and I promise, that Victoria review IS coming!) but I felt this needed to be said.

Several people over the last few months have asked me, at various times, why I am so interested in Civil War reenacting. Recently, someone expressed to me her frustration that historical reenactors in general seem overly focused on the Civil War, and that it seems unnecessary at this point when the United States has so much other history to consider and the CW was over 150 years ago. At the time, I wasn't able to articulate a proper response, but my introvert thought processes have finally run their course and I have something to say now.

Our history as a nation is incredibly important, and sadly many people in our country today (our president among them; yes, I went there) do not seem to take seriously the story of those who came before us or even to know the basic tenets of how and why our country came to be what it is today. The Civil War in particular, though a horrifically sad and devastating period of our history, was the culmination of an inevitable fallout that had been building since the Articles of Confederation (and maybe even before that time- one could argue it was in the works since the first slaves were brought to the Americas). The war itself is over, but the myth of the Lost Cause, the ugly lies of one race's supremacy over another, and the attitudes of hatred that were running deep at the time of the Civil War have not ended.

Why do I participate in living history events to try and bring the Civil War to life? Because of Charlottesville. Because of Minneapolis. Because of the Ku Klux Klan rallies in my own Yankee state. Because the concept of white nationalism didn't die with Nathan Bedford Forrest, and because the Confederate battle flag is still being flown from pickup trucks and apartment windows, simultaneously touted as "heritage" and used as a symbol of bigotry and cruelty. The Civil War stands alone in our nation's bloody history of conflict as the war fought by our country against our country over problems we still face today. Too many people are already forgetting or erasing why. Don't be one of them.

I attended a living history timeline event back in May, and had the privilege of meeting a historian who shows the public ironwork reproductions of slave chains and neck collars, tangible reminders of slavery that give most people pause. Ironically enough, his tent was set up directly across from a Confederate camp. (Not knocking Confederate reenactors here, by the way. Their impressions, when done for history's sake and not to perpetuate a tragic ideology, is valuable to our understanding of both sides, and I respect both that and them.) I had to wonder how much of an impact his chains and collars had on anyone who might have come to that event that day checking Richard Spencer's latest tweet and wearing a rebel-flag baseball cap. Could it have given that person a reality check, even just for a moment?

If the "hobby" of reenacting the Civil War can do that and change even one person's mind, give them the chance to step back and think about the direction our nation is going and where it has been before, then our efforts won't be in vain. We're not romanticizing the past. We're trying to prevent it from happening again, and we could use your help.

TL;DR version: Nazis and the KKK are bad, preserving history and educating people is a good way to help get rid of their influence. Civil War reenacting is awesome. You should get involved.

Penned by Miss Dashwood at 1:10 PM

I completely agree with everything you said, and I am so grateful that you took the time to say it.

I live in Memphis, Tennessee, where we still have a statue of Nathan Bedford Forrest displayed ~proudly~ in an important park downtown. It's an ugly symbol--just as you said--of a past that isn't truly past; of an ideology that should've died a long time ago but instead is growing stronger every day. A lot of people around here really BELIEVE that white supremacist garbage and it has real consequences for the way they treat people who aren't like them. It's frightening.

Part of me really, really wants the statue removed; and part of me is hoping that gets put off for a while, because I know it's going to provoke another riot like Charlottesville. I'm lucky to live out in the suburbs where I can stay safe, but not everyone is so fortunate.

All that to say--keep preaching it, girl. And your historical costumes rock.

Thanks for posting this here as well as on facebook! I'm glad you shared your opinion because of the unique perspective you have from your re-enactment experience. All in all, I agree with you, learning about our history is so important!