Otherwise entitled, In Which I Post Pictures of Underwear on a Public Blog, Thereby Scandalizing the Good Ladies of Cranford and Corrupting the Eyes of All Children Present.

So, backstory. (Yes. I do backstory.) I have an event coming up this fall that requires at least one new dress, if not two, in a Regency style.  So what do I do? I decide that I would also like to have new underpinnings and a new dress for Civil War reenacting.

Because I am, clearly, out of my mind.

Cue the Laughing Moon Silverado corset.  (I tried the Simplicity corset pattern a couple of years ago.  UGH.  Do not recommend.) I did my research, read the reviews, sifted through sewing blogs that talked about Victorian undergarments. The clock started ticking, and I started sewing.

First came the busk.  You can't pick up a busk in a fabric or craft store.  I went to corsetmaking.com for this one.  Here it is, sewn into the mockup pieces, draped artfully across the ironing board. 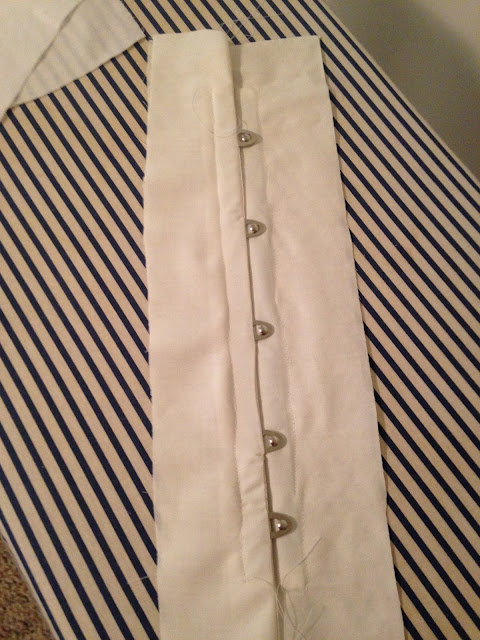 You absolutely have to make a mockup for a corset.  I am generally lazy and do not wish to do the mockup step with a new pattern.  For a corset, though, it's essential.  As seen below. 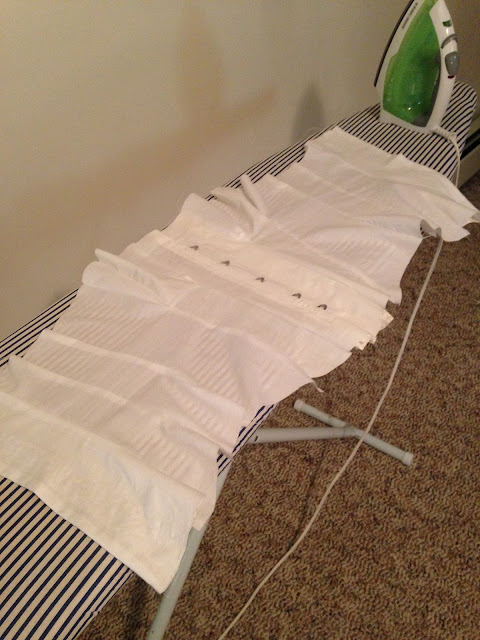 Yeahhhhh, Laughing Moon patterns run large, turns out.  So I went down a size and actually followed the directions for 5/8ths-inch seam allowance instead of my usual skinflint 1/4-inch.  Much better. 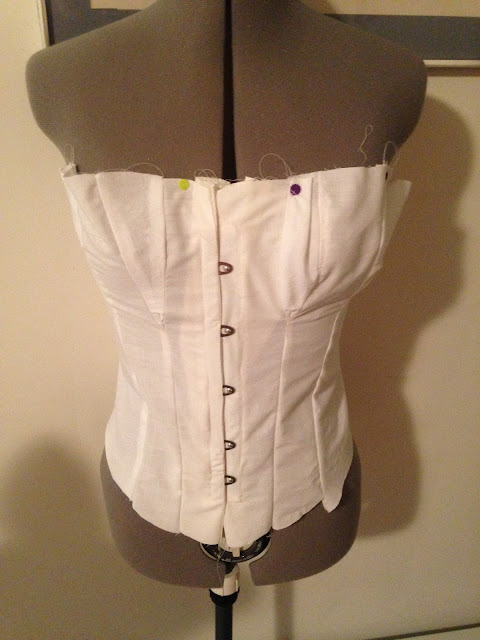 Here it is pinned onto my trusty Mademoiselle.  Note the pins because Mademoiselle isn't quite humanly shaped and doesn't have the same... give and take that the actual Me is in possession of.  So the pins kept the mockup on Mam'selle for the picture.  (Yes, it actually fit me quite well.  No, I am not posting a picture of it on me because, c'mon, it's still underwear.) 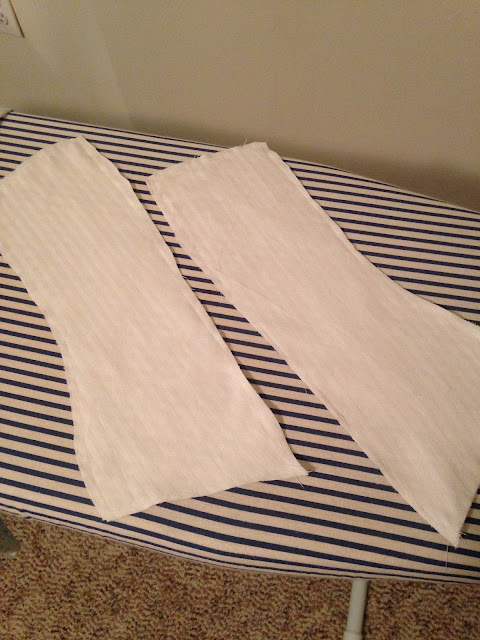 The pattern book (yes, it's actually a book, not just a sheet of instructions- VERY thorough) suggested flatlining fashion fabric to a sturdier background for a little more support, so I took that advice and sewed a lightweight striped cotton to a patterned cream quilting calico.  I didn't have anything heavy like twill on hand and wanted to make this on a budget, so it was a good solution. 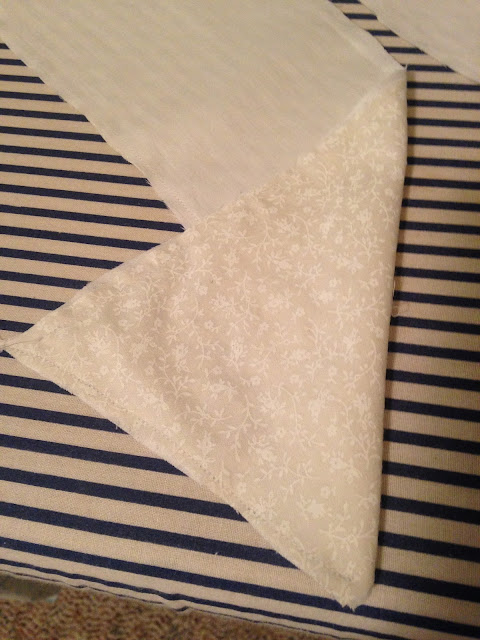 Close-up of the backing fabric. This got sandwiched between the outer fabric and the lining in the completed version, so that was my last glimpse of it.  Farewell, white flowers on a cream background.   You were cute, but not long for this world.  Hope you enjoy the rest of your life being purely functional with no decorative capacity. 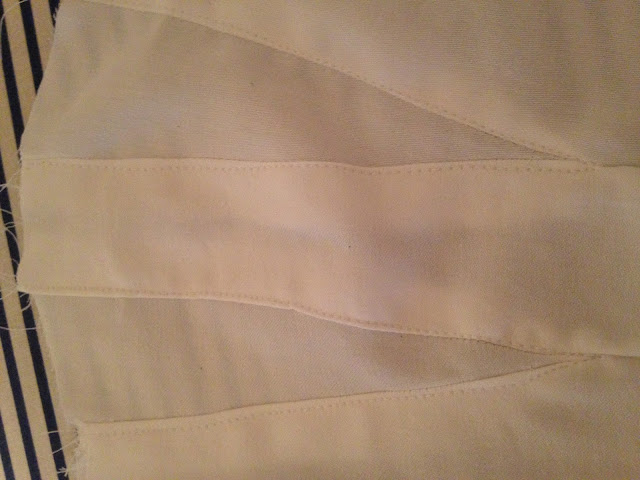 Once a few of the regular pieces were together, it was time to put in the bust gussets.  These are sewn normally with right sides together and then topstitched for additional reinforcement.  Yes, this was the fourth attempt.  It finally turned out all right. :P (Plain white fabric in the photo above is the lining.  I didn't bother taking photos of both the lining and outer layer, as the construction is exactly the same.) 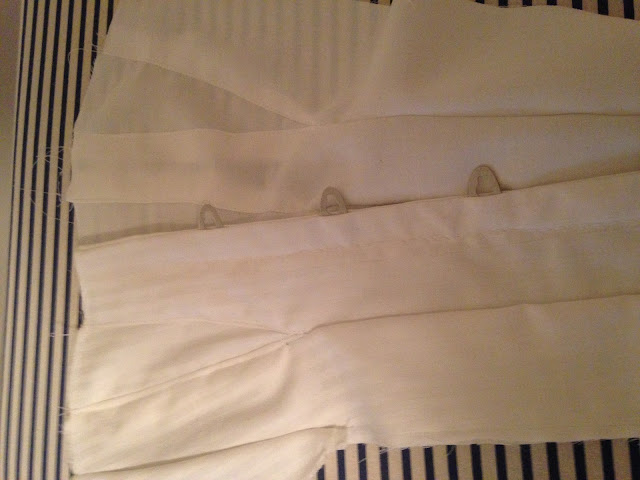 A longer shot of the middle busk piece as well as the side gussets.  This was the part that involved a lot of Fitting and Fussing and Fidgeting.  Eventually I just took a deep breath, made a wish, counted to three, and left it as it was, because it looked like it fit but I knew I was never going to be quite sure until the boning was in and the whole thing was laced up.  (And THAT, children, is called FORESHADOWING. Duhn duhn duhn.) And speaking of lacing, it was time to make EYELETS.  The pattern suggest expensive metal grommets that you punch through the fabric with an expensive grommet awl thingy.  Why do that when you can have hand-sewn eyelets (period correct, to boot!) for a teensy fraction of the price?  The only cost? YOUR SANITY.  And fingertips repeatedly stabbed by the back end of a heavy duty needle.  (Not delightful.)  And several episodes of Call the Midwife, except that part was most definitely not a bad thing. 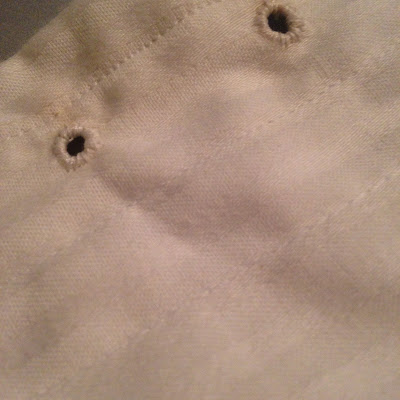 Close-up of the eyelets.  Difficult and painstaking (and pain-inflicting) as they may be, they do look pretty doggone good, and produce a feeling of accomplishment.  I MADE DAT.

Tune in somewhat shortly for Part Deux, in which we put the corset on a chemise on a plastic dress form, and see how it looks.  (And then under a dress. Hopefully.)

What are you sewing these days?  (If you sew, that is.  If not, tell me a good joke so as to have something to say in the comments.)
Penned by Miss Dashwood at 9:37 PM

I started a Regency dress . . . freestyle, so probably not super accurate other than the fabric . . . and the hand sewing. And then I lost a sleeve . . . and the rest of the fabric. Brilliant. That was years ago. I also have gorgeous antique silk sari fabric (they often used sari fabric then for dresses) and cotton velveteen for a Regency outfit. But my regency interest was only a fad, so that will be utilized for modern outfits eventually . . . hopefully.

Oh my gosh, the patience you have! Also, sewing talent. :-)
I am not a sewer, but I AM an avid CTM watcher, so JUST SAYING. (Also, I tell the worst jokes ever (like, 'why did the fly fly? Because the spider spied-her.' I mean, really not funny.) so don't ask ME.)

Well, this was very interesting, although I must admit, some of the terms went over my head, heh. :P But I've dabbled in sewing a tiny bit, so I know my way around the basics... however, I'm not sewing anything right now. In fact I've not sewn anything for a long time.
A good joke! Dear dear, I'm rather bad at jokes... also, the only ones I can think of right now are only ones that Aussies would get so that's not very helpful. :P I can think of one... (hopefully you're familiar with crows. ;D)
"So, two crows were discussing the life rates of crows. They were discussing how so many of them were killed via the road (such as by cars, for example). However, the largest factor that killed crows was not cars, but trucks! For awhile, they could not figure this out... and then they realized. Crows can easily call out to their friends "Car! Car!" ("Caw! Caw!"), but they cannot call out "Truck! Truck!"

Hopefully it's as funny as I remember it being. ;D Haha.

Why don't windows laugh? Because they're afraid they will crack up. :P
Congrats on the corset. :)

This was rather interesting, being that I've always wished to have a corset (and an accompanying gown and all to go over it. :P), but my favorite part of this post was your wit. You made me laugh aloud several times. I'm SO glad you're blogging again!

I went on a roller coaster the other day. Not to spoil it, but it made me scream like a little girl for about 3 minutes...which was kind of...embarrassing, because the ride's only a minute long. :'D

(A joke told by a worker at a theme park I went to. I cracked up so hard, but maybe it's not that funny. I dunno. XD I've always wanted to try on a corset!!! But I can barely sew a square pillow case, so yeah. Making one? NOT happening, ever. :P)
MK

I'd like to start sewing something... I've been browsing around for patterns because I don't have very many in my possession. My big hindrance right now is where to buy fabric. Since Hancock Fabrics closed all their stores all I'm left with is a Jo-Ann, which isn't very helpful for garment sewing because ours is pretty small and has mostly quilting fabric. And then there's the fact that I Hate buying fabric at full price... so yeah. (Actually I dislike buying anything at full price if it costs more than, like, $5! Haha)
This is off-topic, but have you ever read Jack and Jill by Louisa May Alcott? I started it a little while ago but I haven't gotten around to finishing it.

Much respect and admiration for your sewing skills--I can't sew ANYTHING, so I think it's rather a sign of superhuman genius that you can :-)

"I asked Napoleon if he needed to borrow money--he looked a little short."

Naomi,
An avid CTM watcher is a LOVELY thing to be. Who is your favorite character? I adore Chummy. With a great adoration. :D I'm so sad she's not in the later seasons, though. Nor Jenny! I miss her. :(

Miss Meg,
Your joke made me giggle! And yes, I am indeed familiar with crows. :) We have a good many of them in the part of the US where I live.

Molly,
Is that from the joke book Kim has? :P

Natalie,
Well, I'm happy to have made you laugh! I'm so glad to be blogging again too. :D Can't promise any kind of regularity but I'm definitely making an effort to post more!

MK,
THAT was hilarious. :D And don't write a corset off as not happening, ever! I used to barely be able to sew a square pillow case, too. :D

Sarah A.,
I hate buying fabric at full-price too! I never shop at JoAnn's without a coupon. I like to buy a lot of my fabric from thrift stores, actually. I've made so many petticoats from (carefully washed) white 100% cotton sheets! I have indeed read Jack & Jill. It's been a realllllly long time but I remember enjoying it!

Hi Miss Dashwood! I nominated you for the Blogger Recognition Award: http://violetcottage.blogspot.com/2016/10/blogger-recognition-award.html
Abby