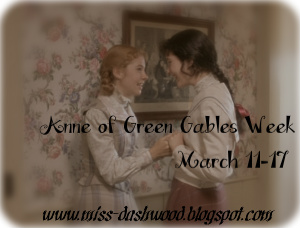 I am extremely pleased to present to you all a guest post written by the most kindred of all my kindred spirits-- my amazing sister the Anne-girl.  Anne and I have known each other for fourteen years now, and I honestly don't know what my life would be without her.  She's hilariously funny, possesses great dramatic flair, is a Shakespeare nut, writes beautifully (go read her blog if you haven't already) and has the best imagination I've ever met.  She's also head-over-heels-in-love with Sir Percy Blakeney (go figure) and is even more of a TSP fan than I am.  Which is saying a lot.
I asked her to write a guest post for Anne week (because you can't have an Anne week without a few words from the Anne-girl herself, right??), and she very generously agreed to do so... without further bleating from me, here you go.
"If a person sorter sees eye to eye with you, and has pretty much the same ideas as you,and the same taste in jokes-why, they belong to the race that knows Joseph."
~Captain Jim, Anne's House of Dreams
The race that knows Joseph. Kindred Spirits. Bosom Friend. Aren't those just deliciously-icious phrases? In the Anne books one finds many and many a kindred spirit. There is Rebecca Dew, Little Elizabeth, Phillipa Gordon, Aunt Jimsie, Mathew, Gilbert, Captain Jim, Miss Cornelia, and Leslie Moore.
All of these belong to the race that knows Joseph. Anne loves them all and they all love Anne. But I have in mind a certain character who on the surface does not belong to the race that knows Joseph. Who does not appear a kindred spirit.
I speak of Diana Barry. I mean seriously, who would have thought that clever imaginative Anne would love practical not so clever Diana?  And yet they are the most loyal friends you would ever hope to find.
ANNE: Your mother hasn't relented?
DIANA: I told her it wasn't your fault, and I cried and cried, but it's no use, Anne. We can't ever be friends again.
ANNE: Diana, will you promise never to forget me, no matter what other friends come into your life?
DIANA: I could never love anyone as much as I love you, Anne.
ANNE: Do you really love me?
DIANA: Of course I do.
ANNE: Nobody's ever loved me for as long as I can remember, except for Matthew and Marilla. Will you swear to be my secret bosom friend?
DIANA: But isn't it wicked to swear? We're in enough trouble already.
ANNE: Not when you're swearing a vow.  I solemnly swear to remain faithful to my bosom friend, Diana Barry, for as long as the sun and the moon shall endure. Now you say it.
DIANA: I solemnly swear to remain faithful to my bosom friend, Anne Shirley, for as long as the sun and the moon--
ANNE: Shall endure.
DIANA: Shall endure. And as long as my mother doesn't find out.
ANNE: Oh, she mustn't.
DIANA: I have to get back; she'll be suspicious.
ANNE: Wilt thou give me a lock of thy jet black tresses?
DIANA: But I don't have any black dresses.
ANNE: Your hair.
DIANA: Alright. I have to go.
ANNE: Farewell, my beloved friend.  Henceforth we must be strangers living side by side, but my heart will be ever faithful to thee.
What inspired that kind of loyalty? As far as I can see in the books at least Diana never made an amusing or intelligent remark in her life you're overdoing it Anne. Er, Diana is just not the brightest light bulb ever.
It is a little different in the movie. Diana is much more interesting in the movie. Josie Pye: Hey, Anne, how do you spell freckle? Diana Barry: Hey, Josie, how do you spell ugly?
See? OK maybe that wasn't the sweetest remark in the world or the most brilliant retort but it brings me to my next observation. Or remark or question if you want to be technical.
Diana Barry is the most loyal girl in the world. Even when Anne gets all the attention, all the praise, and Gilbert sorry but I had to stick that in somewhere, Diana is never jealous. Never. She always supports Anne builds her up never criticizes her.
Is this why Diana is such a good friend? Because she is so loyal? Does Anne love her because she can never do wrong in Diana's eyes?  I hope not. That would like totally ruin my image of Anne, making her extremely self centered. And besides, Diana is loyal because Anne is her friend not the other way around.
So what is it?
I don't know.
Yup that's what I said. I don't know. I have no clue why Anne and Diana love each other so fiercely from the beginning. All I know is that they do.
Now before I go any further let me say that I do not believe in love at first sight. I do not think that dancing dreamily with a cute guy once and exchanging three words with him (see Cinderella) is a good basis for a happy marriage. However I do believe in kindred spirits at first sight.  For some reason unknown to us certain people belong together. And when they see each other (or read each other's blog posts) something happens.
Sorry but I couldn't help it. Hey at least I haven't mentioned Sir Percy yet! Give me some credit. OK back off the rabbit trail to the main road.
Anne met Diana and knew that they were destined to be friends. And friends they became. Their friendship lasted. Through a separation. Through a jump on a bed. Through a wedding. And through a haunted wood. 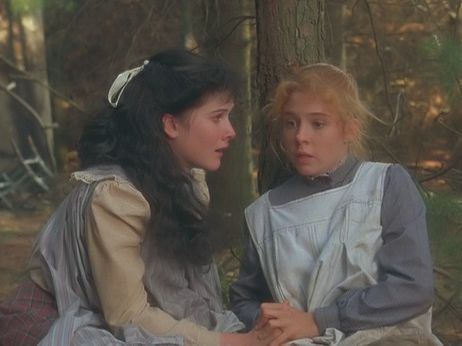 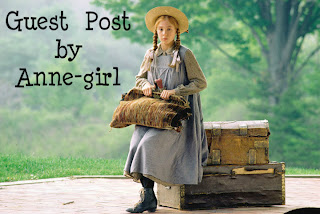 Anne-girl - Sir Percy is MINE. Let's just get this straight. I will share with all you other fans...but he is MINE.

Lovely post. No doubt that we're kindred spirits, no?

Anne-girl, I'm going to comment on this as if I were commenting on a post on your blog, okay? Okay.
First of all, I adore that Diana-to-Josie thing. :) So maybe it's not particularly polite, but Josie deserved it. Undoubtedly. :P

Great point about Diana never being jealous... she's so sweet, and sometimes I forget that. :)

Ally, I came THIS CLOSE to changing that Les Miz picture before I published this post... but I restrained myself. Cosette looks lovely in that one though. But the dude on the left... umm, let's not go there.
:P

Wow. This post, Anne-girl, was really good. I have always, always loved the relationship between Anne and Diana, and this post pretty much sums it up. And MMG several times.

And it was touching. I can't explain it, but I actually have tears in my eyes right now...

Alexandra- umm...you DO realize you could start a major war on blogger if you claim sole ownership of Sir Percy, right...? Just sayin'.... ;)

What a great post, Anne-Girl! I enjoyed it immensely!

Dear Ally,
Sorry! I could not find a good picture with the real Marius in it. I beg a boon of forgiveness.

I also agree about the kindred spirits thing. The first time I read your blog and screamed "You are just like me!" to the computer screen which stared at me with a sad and befuddled expression on its countenance.